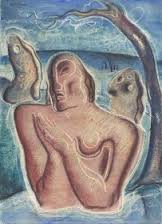 This review is published under Dundee University Review of the Arts. It can be found at: http://dura-dundee.org.uk/classical-art-the-legacy-of-the-ancients/

Coinciding with Roman Empire: Power and People, Classical Art: the Legacy of the Ancients illustrates ancient Greek and Roman culture through a dynamic contrast of paintings, sculptures, screen-prints, ceramics and drawings. Drawn from Dundee’s collection of fine art, the artworks embody the mythical influences of the ancient Greeks and the Romans. The ancient Greeks’ focus on figures and form has laid the foundations for much of figurative art today. It is this combined focus, alongside an affinity to mythology, which engenders the creative depictions of heroes and gods within their work.

The Greeks are considered foremost in their ability to construct mythical stories of heroes and gods. These stories can be seen both in their plays and in their art. This exhibition places historical information alongside the artwork, thus enabling a further understanding of the context behind the work. The exhibition juxtaposes classical with more contemporary art styles, which adds to the allure of Classical Art: the Legacy of the Ancients.

From Kate Whiteford’s Votives and Liberations (1982) to Martin Rayner’s Persephone (1993), the contrast between scale, style and medium is clearly seen. Ian Hamilton Finlay’s work, Arcadia(1975), is set alongside a piece by Gillis de Hondecoeter, The Expulsion of Hagar (1609). It is this somewhat unlikely mix of styles and periods that form an interesting dialogue between the contemporary and the traditional, which adds to the overall success of this exhibition.

Classical Art: the Legacy of the Ancients is effectively curated. The works are arranged to ensure the viewer actively engages with the exhibition as they are guided through it. Reading material is provided in the form of historical books that explore the Greek and Roman influences within Scotland. It is the culmination of the layout of the exhibition, the contextualisation of the works and the artworks themselves, that helps transform this experience into one of simultaneous education and relaxation.

Despite its success, one limitation of this exhibition is the lack of order as to how one views the works. The wall plaques seem to be randomly set alongside works, and the works themselves feature in neither chronological nor topical order. The purpose of this exhibition is to raise the awareness of Greek and Roman influences within Scotland in the realms of art. Perhaps, then, it would make more sense to arrange the works within chronological order, demonstrating the progression of these influences throughout the ages.

Overall, however, this exhibition is well worth a visit. Located in Dundee’s city centre, it contextualises Scotland’s heritage, and highlights a classical influence on contemporary art.Classical Art: the Legacy of the Ancients serves as a reminder to the expanding contemporary art scene of Dundee that, no matter how far art abstracts itself from its preceding foundations, those foundations will never truly vanish.