This review is published under Dundee University Review of the Arts. It can be found at: http://dura-dundee.org.uk/the-theory-of-everything/

The Theory of Everything is a compelling film, adapted from Travelling to Infinity: My Life with Stephen by Jane Wilde Hawking. The intimate workings behind Stephen Hawking’s genius are glossed over, in this instance focusing instead upon his personal life. It is an evocative portrayal of Hawking’s struggles with MND (Motor Neuron Disease), offering a glimpse into the gradual decline of his motor functions, the strain that this placed on his relationship with his wife Jane (Felicity Jones), and his unyielding perseverance in the face of adversity.

Eddie Redmayne offers a skilful performance in the titular role, allowing Hawking’s personality to shine through even in the latter half of the film, in which he is unable to speak. This performance, alongside Benedict Cumberbatch’s role as Alan Turing in The Imitation Game, has been nominated for an Oscar.  Like The Imitation Game,Theory of Everything privileges biographical details over professional ones, highlighting the men’s achievements in overcoming personal difficulties as well as intellectual ones.

Jones similarly plays her role well, displaying the bright English persona to great effect. However, at times this can come across as rather reserved, and as a result the heart-wrenching anguish of this story is limited. The pivotal moment comes at the point where Jane decides to end their marriage, a climax which is made evident by tension-building musical scores and panning camera angles which focus upon the discontent seen in Jane. The increasing dullness and lack of vibrance within the scenes further make the climax evident via skilful use of lighting.

The dissolution of the marriage becomes a point of conflict for the spectator as both husband and wife are portrayed as being equally hurt. Even with Jane’s brief affair with Jonathan Jones (Charlie Cox), the viewer completely empathises with both parties. This love affair arose when Stephen became more and more reclusive during the advancement of his MND. Indeed, the antagonistic influence here is neither spouse, but the illness which eats away at body and relationship alike.

Despite the excellent array of emotive scenes displaying the overlooked personal life of Dr Stephen Hawking, in the second half of The Theory of Everything the film falls into the same pitfall that those which focus on Hawking’s scientific achievements do; it focuses too fully on his battle with MND and as such his prolific intellect can at times be downplayed. Nonetheless, it is to Redmayne’s credit that he has managed to avoid allowing his role as Hawking to be debased as a personification of a disability – rather, as a full and feeling, extremely intelligent man. It is the close-up shots and the carefully selected camera angles which allow Redmayne to achieve this. It is the camera’s focus upon the smallest details of his physical disabilities juxtaposed with his lively facial expressions which allow for him to perform such an excellent titular role.

The lack of attention which is paid to Stephen Hawking’s work is redeemed to some extent at the end with  his presentation of his work, where it is at last shown clearly how much merit his research gains him. The previous scenes showing his published book and his visit to the Queen are swept over, and his ground-breaking title of A Brief History of Time is featured in only a single shot. It is therefore the final presentation which gives true justice to Stephen’s ongoing research.

Overall, this film is both powerful and emotive, though it is somewhat guilty of sweeping over the brilliance of his work. However, Hawking’s work is so widely renowned that perhaps it doesn’t need to be completely reiterated again. This film’s purpose is to demonstrate the determination and commitment which he had for his work, which pushed our understanding of physics forwards in leaps and bounds. Hawking’s work is the foundation for many a theory, andThe Theory of Everything tributes him with a moving performance of his struggles in achieving these theories. 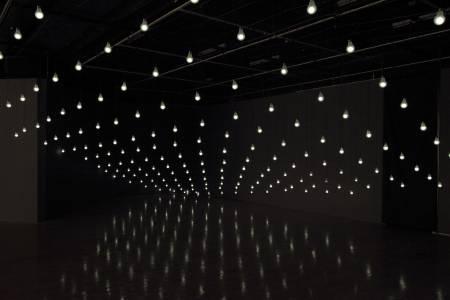 This review is published under Dundee University Review of the Arts. It can be found at: http://dura-dundee.org.uk/indirect-imaging/

The renowned American artist Jim Campbell presents his first solo exhibition in the UK this winter with Indirect Imaging. After studying Mathematics and Engineering at MIT in the 1970’s, Jim Campbell has since worked in filmmaking, interactive video and LED light technology. His work is in the collections of major museums including the MoMA, the Whitney Museum of American Art and many more. It is a great delight to be able to see the genius of his work first hand in the ever-growing contemporary art scene within Dundee. Campbell constructs magical light sculptures using low resolution home movies and light installations. His light sculptures are made using LEDs, the images portrayed in them being derived from the movement within the films he uses where he decreases the resolution of these simple home movies drastically to keep recognisable visual information to a minimum.

Dimly lit, the only sources of light within Indirect Imaging are from the works themselves. This

focuses attention on the works themselves in all of their detail. The use of LEDs in connection with moving images creates a series of abstractions, which in turn create a sense of other worldliness. Jim Campbell’s use of LED lighting to create low-resolution images is further a subversion of the high-resolution ‘technological era’ that we live in today. His low-resolution imaging creates something more timeless: more aesthetic and less anchored in the everyday.

From a small rectangular black velvet panel to a full room installation, the size and scale of the works in Indirect Imaging differ immensely.  Indeed, Tilted Plane is in fact one of the largest scale works ever to be installed in the galleries of DCA. It is the scale and also the ability of the viewer to walk into the installation – to see it from another perspective – which compels the viewer to engage with the work completely. Tilted Plane also relies on reflection: the hundreds of lights hung from the ceiling are reflected upon the floor create an immense spatial depth.

Perhaps the most thought-provoking work is Last Day in the Beginning of March. This work draws on the last day of the life of Jim Campbell’s brother. Twenty-six lights are suspended from the ceiling,

each creating a circular pool of light on the floor. Around the walls are mounted and illuminated fragments of text representing  a memory or an event. The addition of an audio recording of rain completes this installation and  evokes  an overwhelming sensation of melancholy. The incessant rain and the continuous flux of lights accentuate the quality of the mood ; the focus on small textual fragments, the details in the text of  “Windshield Wipers”, “Driving”, and “Raining”, give an importance to the things which at the time might seem mere trivialities.

Overall, this exhibition exceeds expectations; the attention to detail, both within Jim Campbell’s works and its curation, has created an exhibition which is exceptional and original.